Ben Harper with Charlie Musselwhite Get Up! Review

If a case needs to be made for blues music in the mainstream – and really, given the story of Adele, it shouldn’t – this meeting of crack talents from two generations fits the brief.

Ben Harper has been exploring the rootsy end of the pop spectrum for more than 20 years without ever identifying himself with a genre. He has mixed vintage jazz with beatboxing and even covered Strawberry Fields Forever.

But it has been in dialogue that his gifts have flourished, and the passing years have found him an increasingly productive collaborator.

Maybe it’s something to do with the pliant lightness of his voice, or the way his musical interests can wander, but these collaborations have added heft to an always-engaging career. Harper’s 2004 release with The Blind Boys of Alabama, There Will Be a Light, may have been the most satisfying record by either of them – and it’s well trumped by this terrific two-hander.

“I only know one tune,” has been Charlie Musselwhite’s confession – but what a tune. This is the veteran whose third wedding featured John Lee Hooker as best man, and since his sensational debut in the 60s blues boomhe has earned an unequalled reputation as a harmonica man.

Now sweet, now rasping, and always chorusing and counterpointing with the keenest ears around, Musselwhite’s dialogue with Harper’s soulful tenor and punchy guitar is pure Astaire and Rogers.

Fans of the harmonica player might think him too much the straight man here, but the presence of living history has Harper at the top of his game.

There are wide, colourful horizons to Get Up!’s “one tune”, from the clapping gospel chorus of We Can’t End This Way to the bubbling bass riff of the title track, or in the way the stripped-down slow burn of Don’t Look Twice gives way to the blast of the full band.

All the way through, Musselwhite’s subtle, rich-toned commentary maintains a focus. So you’ll hear echoes of Jimi Hendrix, the Blind Boys and even the laidback groove of Jack Johnson here, but make no mistake: this is the blues. 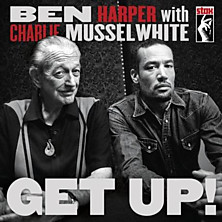