'Bluebeard's Castle, a myth, a legend'...an ancient gothic monument to the power, personality and loneliness of Duke Bluebeard, who's just brought his new wife, Judith, home for the first time.

Sally Burgess is Judith, wondering what's happened to Bluebeard's previous wives, and what exactly lies behind the seven locked doors in her husband's gloomy domain. Burgess manages to make Judith the multi-dimensional character she deserves to be: the dedicated new wife, determined to bring light into the darkness of Bluebeard's soul, slowly being overawed and overwhelmed by what she discovers as the doors are unlocked, until she accepts her fate alongside his former wives.

John Tomlinson's Bluebeard broods magnificently, his voice and personality as overpowering as the atmosphere of his castle...and just in case you think of this opera as a two-hander, let me introduce the third member of the cast: the Orchestra of Opera North conducted by Richard Farnes, who provide vivid colours and deep shadows, enhanced by a plush, velvety recording that delineates Bluebeard's realm in its awful majesty.

You can feel the walls closing in on you, there's such a superb sense of place - I found it quite spooky on headphones - and the dynamic range is sometimes stunning.

Of course, there are other fine recordings of the work on disc, so we have to consider the unique selling point here: it's performed in John Lloyd Davies' English version, which for some is going to be a complete turn-off, as (like Janacek opera) the music is so closely tied to the rhythms and colours of the Hungarian language. But the diction is so clear and the libretto has such immediacy that it strips a layer away from the communication process; there's no need at all to look at a libretto (although one's supplied, as always in these Chandos Opera in English productions).

It's a superb achievement, and I hope it allows a new generation of listeners to appreciate the power of one of Bartók's finest scores. 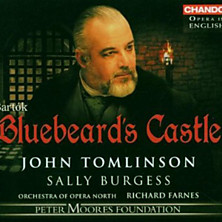