This sensitive, dynamic recording is a joy, and may even constitute a revelation.

Steven Osborne has chosen another cornerstone of the Russian piano repertoire as the follow-on to his critically acclaimed recording of Rachmaninov's 24 Preludes, and partnered it superbly with two lesser-known sets of miniatures by Prokofiev.

Mussorgsky composed Pictures at an Exhibition – here titled …from an Exhibition – in the first three weeks of June 1874, inspired by a exhibition mounted in honour of his late friend Viktor Hartmann, an architect, painter and designer who had died suddenly of an aneurysm in his late 30s.

The exhibition featured Hartmann's designs, watercolours and drawings, and Mussorgsky's work consists of musical depictions of 11 of them, interspersed with Promenade interludes designed to represent himself walking between the exhibits in various moods.

It's an extraordinary, multicoloured, often brilliantly virtuosic work, in which moods, textures and colours shift at every turn. However, it's also a work that lends itself with alarming alacrity to bombastic thumping.

Apologies to Mr Mussorgsky, but it's no exaggeration to say that Pictures..., when under the wrong fingers, is more akin to a hellish aural endurance challenge than to a work with which to dazzle and excite.

In this context, Osborne's sensitive, dynamic recording is a joy. Indeed, for many it may constitute an entire revelation: “You mean Pictures… can sound like this?”

He gives us elegantly arched and flowing phrases, an effortless handle on the many virtuosic demands, and a nuanced, sympathetic touch that produces deft, light vivaciousness one moment and firm sobriety the next.

In short, the beauty and variety of Mussorgsky's Pictures are presented in all their glory here, with the sonorous tolls of The Great Gate of Kiev the satisfying climax.

Prokofiev's two later sets of miniatures, the acerbic five Sarcasms (Op.17) of 1912-1914 and the gentler Visions fugitives (Op.22) of 1915-17, constitute an equally satisfying and highly complimentary second half of programme. 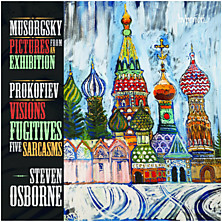