One of the very finest rock albums of recent history.

Rewind a month and a bit. Kanye West’s utterly unique My Beautiful Dark Twisted Fantasy has got critics in a dizzy spin, fingers dancing across keys in support of its grandiose design and, albeit less so, to voice dissatisfaction with an end product that reportedly cost three million dollars. That the album was a talking point in itself, there’s no question. But something else prompted a thousand bloggers to take to their machines: a perfect, 10/10 score for the album on influential (and notoriously tough to impress) US website, Pitchfork.

Pitchfork doesn’t dish out top marks anywhere near as frequently as so many of the UK’s monthlies do, especially not when it comes to new releases (though reissues get a smoother ride, typically). So this was reason enough to leave an opinion on a messageboard somewhere in the blogosphere. But Kanye’s A-star, smiley-faced, have-a-house-point report card wasn’t unprecedented. Rewind, again: 2002, and a raucous, violent, firmly underground (for all their efforts) rock outfit from Texas are the recipients of a 10/10 review on the same site. …Trail of Dead might not have been big, but they were loud, and with their third long-player they successfully showcased a developed compositional ability that outstripped not only their past efforts, but most rock albums released in the last decade.

After 1999’s Madonna, the group’s second LP, earned them a fairly small but fiercely loyal international following, …Trail of Dead – fronted primarily by the vocal powerhouses of Jason Reece and Conrad Keely (and backed by Neil Busch and Kevin Allen) – were snapped up by major label Interscope. Source Tags & Codes therefore had a bigger budget behind it than the band was previously accustomed to – and they made every dollar count, with not a second of space wasted. While volume was still front and centre, the group worked on a series of orchestral embellishments and horn sections to flesh their punk-energised arrangements into final wholes that swoop and soar, dazzling with accomplished polish yet – and this is very important – still rocking immeasurably hard.

Where to begin? With the beginning, actually – Invocation is the first sign that more is most certainly more on this set, a piano line weaving its way through a succession of seemingly-radio-sourced samples before the disc erupts, after a telegraphing bass drop, into It Was There That I Saw You. It’s an electrifying opening, two minutes which immediately impress. And it goes on, stunningly and assuredly – from Another Morning Stoner’s intoxicating grooves and super-tight snare beats; through Days of Being Wild, a song that demands to be played at a level that no stereo manufactured to date can manage, and the awesomely epic How Near How Far; to the cool relief of the title-track. If you picked up the UK special edition, Blood Rites brings the record to a close with a lung-busting finality.

A masterpiece of its time, Source Tags & Codes really does deserve to be held in as high regard as In Rainbows or Funeral, or any other critical triumph of recent history. Top marks, warranted. Fast forward a month or so and …Trail of Dead are back with album seven, Tao of the Dead. But it’s unlikely to resonate with its audience in the same way as this, a record that I, personally, could happily listen to ‘til the end of days without ever growing tired of. 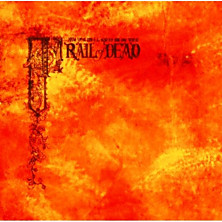