...pretty much carved out the template for heavy rock.

Having failed to make any significant commercial impact with three previous albums, Deep Purple finally turned some heads following the recruitment of vocalist Ian Gillian, bassist Roger Glover, and the premier of their atypical but ambitious crossover project, Concerto For Group & Orchestra, at the Royal Albert Hall in 1969. Though this classical curiosity secured a Top 30 placing, there was a nagging sense that they had yet to fulfil their true potential.

Recorded in snatches between relentless gigging over a six month period, In Rock, released in June 1970, did just that. In some respects the material was a skilful synthesis of what was already in the air. “Into The Fire” simmers some of the juice left over from Hendrix (“Purple Haze”) and Cream (“Politician”), “Black Night” (not originally on the album but included on the anniversary edition) is a steroid-enhanced augmentation of the Blue Magoos’ “(We Ain’t Got) Nothin’ Yet.” Even the album’s rhapsodic stand-out centrepiece, “Child In Time” was itself adapted from “Bombay Calling” by US psychedelic folk rockers, It’s A Beautiful Day. In lesser hands a sculpting of such unlikely raw materials might not have worked.

That it did is evidence of their strident confidence that the new line-up had found. Deep Purple raised the bar thanks to the water-tight rhythm section of Glover and drummer Ian Paice, who together underpinned the diamond-hard riffing from which Ritchie Blackmore’s fast-moving excursions would go head to head with Jon Lord’s neo-classical noodlings, like a couple of cranked-up kamikaze. That we take the seam-splitting cod-operatics as the norm for today’s heavy metal tonsil-torturers is due in no small measure to lead singer Ian Gillan’s work here. Not even Led Zeppelin’s Robert Plant had the range of shrill theatrics or glass-worrying octaves achieved by Gillan on this record.

Their collective chutzpah was captured via the album sleeve; rarely has a cover so presciently reflected the monumental influence its contents would have in the years that followed. Reaching number 2 in the UK charts in 1970, it made the band and pretty much carved out the template for heavy rock. 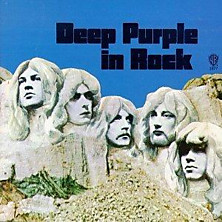