Meticulous and soulful, this is exemplary electronic RnB.

Feel for the new. The music industry presents a fine façade of caring about its up-and-coming crop – but beyond fresh-on-our-radar style features, bright talents can soon find themselves shrouded in shadow.

Would-be tastemakers move on as should-bes, sounds processed and stamped with a potentially career-defining rating, flounder. Unless, that is, they’re made of a rare substance, possessing qualities enough to ‘return’ in a way that deconstructs dated expectations.

Vondelpark’s debut album could be dealt short shrift by too-eager critical corners. It comes some time after their last (non-single) release, summer 2011’s NYC Stuff and NYC Bags EP – period enough for opportunity to be assumed passed. But this isn’t a band trading in quick fixes. This is music of lasting impression, given the chance it deserves.

Seabed is almost exclusively singular of pace – and that tempo is the same unhurried saunter established on NYC Stuff… and its preceding EP, 2010’s Sauna. The band – once just Londoner Lewis Rainsbury, now a fully realised trio with Matt Law and Alex Bailey – are rarely in a rush to connect their songs with the listener.

In a market where instant-download delivery inspires limited attention spans, it’s a bold statement. Persist as you should with Seabed, though, and familiar, positive feelings surface. Remember hearing The xx’s first album properly, in isolation, with the press din turned all the way down? This experience is comparable.

So by biding their time, between piqued hype and album release, Vondelpark have done themselves a world of favours. First impressions, forged within the cacophony of chasing the next whatever, have no place here: Seabed is better than rash assessments, warranting significant one-on-one time.

This is exemplary electronic pop, tracing dance and RnB patterns but rarely running over them in anything permanent. Tracks like California Analog Dream – a redressed refugee from Sauna, now fuller of form – and Blue Again merge warm acoustic instrumentation with machine-driven motifs.

Come On and Seabed are hazier affairs, but the effect is never lo-fi. Bananas (On My Biceps) does up the pace: it’s something like The Beloved cut-and-pasted into the present by Jamie xx. But these are loose parallels; Vondelpark express their individuality with great clarity.

Everything is meticulous, not a note out of place – but this studied delivery is successfully supplemented with resounding soul, proving infectious indeed. Visible symptoms are subtle, but feel your way across Seabed and expect to soon be smitten. 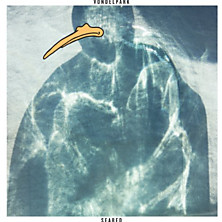