Every generation has its own version of Johnny Cash. In the 21st century, most people know Cash as imagined by the producer Rick Rubin: a weathered monument of popular music, sermonizing rock standards like Hurt with a voice cracked by the weight of too much living.

But it’s a sheer tonic to meet the Johnny Cash of a different era, a 22 year-old just moved to Memphis, with a timbre as deep as a canyon and cool as the other side of the pillow. This was the young singer whose rigorously simple three-chord songs were a shot in the arm to folk and rockabilly fans in the 1950s, as well as the country crowd.

And listening to the demos he recorded before he signed to Sun in 1954, what’s surprising is how little he would change. The songs are sweetly crafted and wryly regretful; here, already fully realised, are classics like Get Rhythm, Country Boy and I Walk the Line.

Fully realised, too, is that voice – a resonant, lived-in instrument that draws on preaching traditions for its weight. Whether he’s blaspheming or kidding around, Cash still sounds like he should be singing from the pulpit. And he certainly connected with his congregation.

A 15-minute show from KWEM in Memphis finds him plugging kitchens for the Home Equipment Company, or soliciting requests: "If we know it, we’ll sing it – if we don’t know it, we’ll try to learn it." This is wonderful history, and introduces the punch of The Tennessee Two before Marshall Grant’s ding-dong bass and Luther Perkins’ chicka-boom guitar are given full rein on a slew of outtakes from Sun, including unfamiliar gems like Goodnight Irene.

Disc two introduces the Johnny Cash of a different generation – wildly successful, living in Los Angeles, drink- and drug-addicted and flirting with the glamour of television and film. Cash was a star, and these tracks from 1958 to 1969 are pure showbiz, feather-bedded by backing singers, novelty train whistles and military drum rolls. There’s a kitsch appeal, but this stuff belongs in a different world from the marvellous early disc. 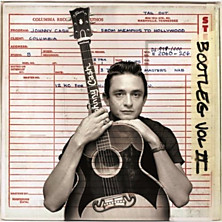