Push Band on a Mission Review

Nothing new, but there’s enough fine funk here to keep the body moving.

The economic crisis and political turmoil of the present day in many ways recalls the volatile era of the late-1980s, one of the more significant times that forked-tongue politicians were whispering euphemisms like ‘recession’ behind closed doors, naming it officially at the dawning of the 1990s. As we are currently revisiting those years involuntarily, it is perhaps somewhat fitting to have a new album from Push, the retro-modelled funky soul act that first came to light at the end of the 1980s, when its players spearheaded the Acid Jazz movement, being regulars of Gilles Peterson’s Sunday afternoon sessions at Dingwalls.

The original Push was hailed as a pioneering act of the UK’s ‘rare groove’ scene, but that epithet is something of a mixed blessing, for although there is no denying the high calibre of the musicians that make up the group in its present form, the sound is, by definition, one that constantly references the past. That means close listening reveals a lot of obvious influences; but the good news is that the forcefulness of the playing and the keenness of the musical arrangements results in a pleasant listen from start to finish, and one that’s guaranteed to get your body moving. The horn section is particularly tight throughout, and the core of drummer Crispin Taylor, bassist Ernie McKone and guitarist Mark Vandergucht keeps things mightily groovesome.

The disc’s title-track sets out their modus operandi, being a decent vehicle for new vocalist Daniel Pearce to strut his stuff – though he’s stronger on the emotive Better Believe, which appears midway through proceedings. In contrast, driving instrumentals The Blast, Walk in the Park, Pushing It, The Punch, Rolling South and Back to the Funk all show off the band’s musical tightness. Even if there are momentary nods to nuggets of yesteryear, like the mutated riff on Papa Was a Rollin’ Stone, here re-cast as Long Gone for a desultory guest spot from former Average White Band member Hamish Stuart (the band’s Pick Up the Pieces being seemingly referenced in passing earlier on), there is enough oomph to keep things moving. And Candi Stanton sounds on fine form on the funky, friend-shifts-to-lover ballad, Where I’m At.

Whether you hail this set as another classic or one for eject probably depends on how much funk tickles your fancy, and whether you are troubled by a sound that perpetually reminds you there is nothing new under the sun. 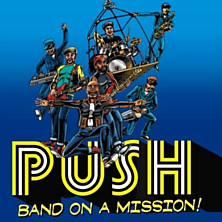