She’s transformed into a revenge-hunting, firebrand diva – and it suits her.

In every sense, Rihanna is an extraordinary pop star. Still only 21, she has sold 12 million records worldwide, and bagged the longest-running British number one single of the decade with Umbrella – a song with a perfect title for 2007’s rainy summer, which, nevertheless, had an oddly stark and far-reaching sound for its time.

Two years on, her new LP nods towards adult material in its title as she comes of age, and also follows her assault earlier this year by ex-boyfriend Chris Brown, the results of which were shown in a horrific leaked photograph, the ghosts of which Rihanna works through here. She sounds bolder and braver as a consequence, pushing her strangeness as a pop star to the next level.

Mad House sets the album’s mood well, beginning like a dubstep track before a male voice cuts through the gloom: “Ladies and gentlemen – to those among you who are easily frightened we suggest you turn away now. To those of you who think they can take it, we say welcome.” Imagine Michael Jackson’s Thriller made terrifyingly modern, with Rihanna’s subsequent invitations – “come on, come on in” – both baiting and seducing her listeners.

As the album jabs and stutters onwards, her Barbadian vowels still conjure up the bluntness of reggae delivery, and continue to give her sound directness and edge. The sounds that surround it are more of a mixed bag, however – fantastic when they are icily futuristic on the dark electronica of G4L and Hard, less so on the Latin-flavoured trance of Te Amo, or Slash’s rock guitar theatrics on Rockstar 101.

Rated R’s lyrics are its calling cards, however, glowering darkly in songs like Fire Bomb, Russian Roulette and Cold Case Love. Many hint towards her relationship with Brown – “what you did to me was a crime”; “I cant wait to see your face when the front windows break”, ”all I’ve got are these photographs” –  but they take them to the heights of grand, sci-fi cinema, with Rihanna turning into a revenge-hunting, firebrand diva. The stronger she sounds, the more it suits her, too.

Rihanna has achieved so much already, and this album suggests she will continue to do so in widescreen, and on her own terms. 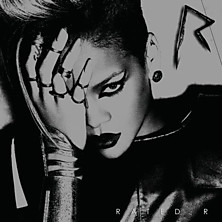