These are killer dancefloor tracks with plenty of candy for both the mind and the feet.

The legendary Brazilian group Azymuth have been keeping toes tapping for over thirty years with their funk/jazz fusion, or as they call it ‘crazy samba’. This is their first album, remastered and released outside Brazil for the first time. As a bonus the generous folk at Far Out recordings have also thrown in a second disc of remixes.

Disc one is the original album, and is a mix of up-tempo jazz funk freak-out and loungy mellow grooves, all with a distinctive Brazilian swing and a few healthy injections of psychedelia. Tracks such as “Melo Dos Dois Bicudos” and ''Estrada Dos Deuses” define the up-tempo sound; samba swing, pimped-out bass and wah-wahs, organs backing huge synth leads, melodic vocal chants and spacey analogue sweeps. These are killer dancefloor tracks with plenty of candy for both the mind and the feet.

There are plenty of moments of calm amongst the craziness, such as “Brazil”, a warm and charming piece on which the drums and the bass sit back and let the keys pour their little hearts out. “Morning” is in the same vein, while opener “Linha Do horizonte” which has a wonderful childish innocence to it. They should pump this stuff into prisons and watch the crime rates drop off.

Disc two contains the somewhat hit-and-miss remixes and re-edits. Things get off to a great start with the Harmonic 33 mix of “Melo Dos Dois Bicudos” which takes snippets of the original and works them into an infectious bouncy hip hop groove smeared with string sweeps and uneasy vocal stabs. The epic spiritual south mix of “Wait for My Turn” maintains the standard but sadly, after this, things begin to drop off.

When they wrote these tracks Azymuth were playing around, experimenting with sound and obviously just having a lot of fun, and that shines through in a great album that has quality all the way through, yet never takes itself too seriously. This record manages to invoke its time perfectly but very rarely sounds ‘dated’. A classic album that isn’t going to leave my CD player for quite some time, if you like to get funky then just buy it - you won’t regret it. 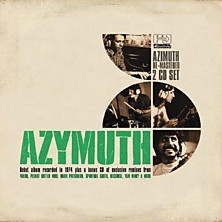