At times it's impassioned and edgy, cut with just the hint of a snarl, at others it's...

The Mountain Goats are a prolific outfit whose beginnings in the early '90s were documented on numerous lo-fi cassettes, 7'' singles and compilations, making an accurate count subject to some debate. Whatever the number, at the centre of The Mountain Goats stands John Darnielle, singer and composer of myriad impassioned, poetically allusive songs.

''Sax Rohmer #1'' is a ragged anthem, the music slipping and sliding like trying to walk along an icy pavement. ''San Bernardino'''s pathos-ridden recollection is borne on mournful strings and gentle voice. ''Lovecraft in Brooklyn'' is urgent and spare, Darnielle's narrative from the edge battling it out with gritty rhythm guitar to impressive effect. ''Tianchi Lake'' switches pace, changing down a gear as though teleporting from urban squalor to something that might just be wistful contemplation.

Darnielle's reedy, nasal voice conveys feeling with a surprising subtlety. At times it's impassioned and edgy, cut with just the hint of a snarl, at others it's jaunty or wry. The music's often spindly core of voice and jangly guitar is given colour by organ, strings, drums and the like. There's a sense throughout Heretic Pride of an unvarnished, lived realness that's raised up and given wings by Darnielle's poetic sincerity. If you're a fan of the quiet backwoods desperation of Bonnie 'Prince' Billy or the literate strangeness of Sufjan Stevens then this album might be for you. 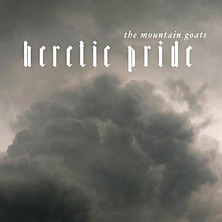