Less Endless Now and more Perpetual Yesterday, with all the ennui that implies.

Dalston three-piece Male Bonding's rise to relative glory was swift: one minute, so it appeared, they were hammering out lively, boisterous three-chord shows in their friends’ kitchens, and the next they were a seldom-seen British signing to the illustrious Sub Pop imprint, for whom they debuted with 2010’s Nothing Hurts LP. Yet for all those who were taken by these perpetual underachievers' unassuming pop suss and heavy-lidded grunge stylings, just as many punters were generally left puzzled – despite a cheerful melding of fuzz-pedal energy with melodious yet agreeably off-key vocals, both Male Bonding’s sound and their success seemed to be allied with a curious fashion agenda, a retreat from the here and now to the check-shirted slacker chic of the early 90s.

It's a problem that's only exacerbated by this swift follow-up, which portrays a band still with shoulder-shrugging faux-teenage inarticulacy high on their agenda, amidst a delivery of doped-out Ramones-y monomania which can make this album’s 36 minutes feel like an hour. The problem is not so much that the older listener will be reminded of post-Nirvana also-rans like Bivouac and Superchunk, or the strains of Steve Lamacq’s voice on the Radio 1 Evening Session. On its own terms, Endless Now's combination of amped-up energy and pop ear-candy is neither salty nor sweet enough to really leave an aftertaste. The ineffable charm that the band possesses does elevate them above similar nostalgia-loving sorts, like their much-feted yet enormously underwhelming contemporaries Yuck, but it can't save them from the sheer monotony of the ditties here. Even standout cut Bones drags on for a brow-furrowing six-and-a-half minutes, and the balladic The Saddle comprises the only welcome break from the dispiriting barrage of full-pelt drumming and can't-be-arsed tuneage.

In an era in which the whole notion of indie rock is arguably looking in dire need of a good lick of paint, the paradoxically fashionable anti-glamour of Male Bonding can't help but seem a curiously retrograde indulgence. On this evidence, we're dealing less with Endless Now than Perpetual Yesterday, and all the ennui that implies. 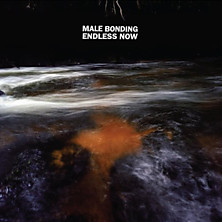