Back in June 1994 the three 'W's only stood for one thing - and it had nothing to do with the Internet. Wet Wet Wet were at the pinnacle of their career then, when - thanks largely to a Hugh Grant film - they managed to stay at no.1 for what seemed likethree years with the Troggs cover, "Love Is All Around".

But the Wets were no one-hit-wonders. In fact, they managed to notch up 25 hits during their decade of chart success and became one of Britain's most successful bands ever. In 1999, however, it all went a bit wrong, with Marti Pellow announcing a solo career and a drug problem, and the four going their separate ways.The band didn't see each other for four years after that. The good news (or bad, as the case may be) is that 22 years after forming, Wet Wet Wet are well and truly back, with a Greatest Hits, a big UK arena tour, a DVD and their first single for seven years.

There are three brand new tracks on this collection, but none of them mark a massive musical departure for the band. No drum 'n' bass experimentation here. The single -"All I Want" -opens the album in a poppy, bluesy, country style, and Wet Wet Wet fans will immediately feel like the band never split. Of the other new ones, "Hear Me Now", with its jangly guitars and orchestral backing, is unoutstanding. Album-closer "(Feels Like I'm) Walking On Water" is a soothing combination of steel guitar, organ and strings, giving them a more mature sound than before.

As for the hits, they include the upbeat and marvellously 80s synth-brass fest, "Sweet Little Mystery", and the chart-toppers: "WithA Little Help From My Friends", "Love Is All Around" and "Goodnight Girl". While many Wet Wet Wet tunes tend to disappear into the background, there can be no denying that they're responsible for some truly soulful pop gems, and The Greatest Hits is proof of that.

Unfortunately, much like Dido, Travis and Ronan Keating, Wet Wet Wet are unlikely to do anything exciting, ever, but they're sure to sell bucketloads more records - and just in time for Christmas, too. 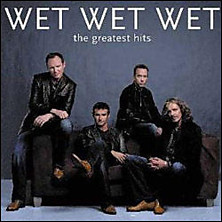