Diamond’s biggest hit in the States, this soundtrack shifted over six million.

If 1980’s Bob Gaudio-produced The Jazz Singer marks the point at which Diamond crossed over from respected, rugged torch balladeer to schmaltzy cabaret act, he could take solace in phenomenal sales. His biggest in the States, it shifted over six million. This despite the fact that the film which it soundtracked, in which Diamond starred as a Jewish singer opposite one Laurence Olivier, was generally panned. (It was a conceptually bizarre remake of the Al Jolson classic.) Still, it spawned songs as emotionally domineering as Love on the Rocks, Hello Again and the patriotic (and therefore enormously commercial) America.

Neil’s acting gained him nominations for both a Golden Globe and the first ever Razzie Award for Worst Actor (he won the latter). To add painful injury to insult, he’d recently been wheelchair-bound for months, having had a tumour removed from his spine. So for all its gaudy sentimentality, The Jazz Singer was a personal triumph over adversity. If he now traded in the tingling presence of his earlier, rawer recordings, he hit on a polished soft-rock sound that even today is being rehabilitated by hungry ironists.

Love on the Rocks was co-written with Gilbert Bécaud, whose songs had been covered by Elvis, Sinatra and Judy Garland. Its deceptively calm verses cede to a bridge/chorus of lung-rattling muscularity. It seems to include a charged hint of Diamond’s cynicism at those who fawn over celebrities then vanish as swiftly as ephemeral pop fame. Hello Again is a Lionel Richie-style weepie, the lady in question awkwardly addressed as "my friend". It became Diamond’s calling-card for the next few years. And while America is a stream of clichés about the hopes and fears of immigrants arriving in the US, it’s smart enough to honour "the flag unfurled" (well, what else rhymes with "world"?) and thus struck a profitable chord.

The album’s mid-section sags with lacklustre disco-lite numbers, Diamond hollering anthemic slogans as only he can. There’s even a Jewish traditional interlude. After this, Diamond’s standing was to drop, until Rick Rubin’s intervention. But that throaty rasp in Love on the Rocks captures the man’s majesty. 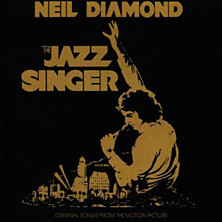