Two master guitarists from Cuba and Congo. A fluid and welcome treat.

Two master guitarists from Africa and Cuba combine to create an album which is a fluid and welcome treat.

It would seem the most natural thing in the world for the cultures of Africa and Cuba to combine forces musically. African artists are undoubtedly influenced by Afro-Cuban rhythms - Ricardo Lemvo, Africando and Youssou nDour come to mind. And Cuba's musical heritage is firmly rooted in Africa. Yet its a rarity for musicians from both continents to collaborate.

Papa Noel grew up in the Congo, listening to Cuban records on his mothers phonograph. He took up the guitar as a teenager and was part of the emerging rumba scene in that country of the late 50s. He's now recognised as one of Africa's finest, having played with legends like Franco and T.P.O.K. Jazz.

Papi Oviedo, is a master of the Cuban tres, a mini-guitar with three sets of double strings.A veteran of the Cuban big band circuit having played with Elio Reves orquestra for 15 years, most recently he's been delighting world audiences on tour with Buena Vista Social Club's Omara Portuondo.

And it's the guitar work which is truly astounding on this album, particularly on the second track, "Kin Havane", where each master guitar solo washes over you like the waves along Havana's Malecon. Then theres the high soulful sound of Papa Noel's voice which would soften the hardest heart, particularly on the plaintive "Juliana". Again, the solo guitar sequence which opens this love song is simply superb.

Right from the opening title track, "Bana Congo", the African backing vocals set an earthy tone and pace. The song pays tribute to Papa Noel's country and culture. The flourishes from the horn and rhythm sections are contained by the distinctive chorus which deftly opens up for the guitars of Papa and Papi.

Theres a subtle energy to Bana Congo which uplifts rather than over-exerts. Not for these sixty-somethings the sweat of soukous or timba. Rather the tender yet up-tempo rhythms of rumba and son. With songs sung in Spanish, French and Lingala and excellent sleeve notes, this album truly celebrates the Afro-Cuban connection. 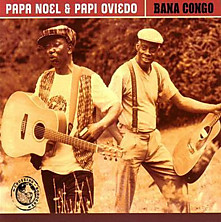