Given that members of pop groups going solo has such a colossal stigma of failure attached, the process is probably daunting enough as it is. Spare a thought, then, for Mutya Buena. In addition to the above, she's got to contend with any number of labels assigned to her throughout her seven years in the spotlight. Buena's toughest obstacle will be either living up to or breaking down expectations, depending on whether you view her as an untouchable icon of cool for the digital age, or at the other end of the scale, a stroppy chav.

Whichever camp you fall into, solo debut Real Girl makes it clear from the outset that Buena is determined to stamp out all preconceived ideas. A diverse collection of tracks proves that, as well as breaking through any existing pigeonholes, she's reluctant to create any more for herself.

"My Song" and the title track see Buena underlining her new status as an amiable, sunny human being, which they manage with panache. However, the album suffers during the strained attempts to push this further, via the woozy "Suffer For Love" and the heavily-gooey "Wonderful".

Elsewhere, the promise of the album's most exciting collaboration is anything but followed through. "B-Boy Baby", a reworking of the Ronettes standard featuring Amy Winehouse, is probably something that, on paper, would work as a one-off performance at a Royal Variety show, but should never be committed to record. In practice, only the latter rings true. With Winehouse phoning in a performance that barely registers, it’s fun, yet feels awkwardly gimmicky.

It's when Buena unleashes that familiar ballsy, aloof persona that the album really comes to life. "Strung Out" is an acidic ballad with a brisk, thumping backbone, while "Not Your Baby" is immediately catchy, refreshingly lively, and saturated with undiluted attitude.

Real Girl also reveals that Buena’s voice, rather than being what we had assumed was a distinguishing husky growl, is in fact a multi-layered instrument capable of tackling any style thrown her way.

If Real Girl is Mutya Buena digging her heels in and declaring 'THIS IS ME!', then it's certainly implying we didn't see all that much of her during her time as a Sugababe. And while some of these new aspects may not be as effective as her more habitual style, you’ve got to commend her for sticking her neck out. With a flair this unique and this huge, pinpointing the right sound to showcase it is going to prove difficult. But once she does, based on Real Girl’s strong points, she’s going to soar. 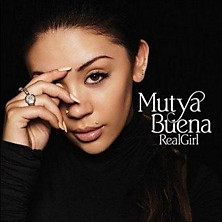