Any of Coldplay's more traditional fans slightly bewildered by the more experimental touches Brian Eno brought to Viva La Vida must have been completely confused when the band chose that album's other co-producer Jon Hopkins to open their concerts last year. For a purveyor of radio-friendly rock this London-based composer and producer most certainly is not.

Rather, over the course of two previous solo albums and studio work for artists as disparate as King Creosote and David Holmes, Hopkins has made his name crafting sounds which belong somewhere between contemporary classical and electronica's more abrasive extremes, an entire world away from the enormous stadiums to which his newfound friends took him on tour.

That's not to say Hopkins isn't capable of producing music as epic, soaring and emotional as any power ballad in his own way though. Take Light Through The Veins for example – the centrepiece of his new solo album and the track that apparently convinced Coldplay to get him onboard. A close relative of Ulrich Schnauss' In All The Wrong Places, it's a majestic piece of widescreen shoegazing which grows ever more expansive throughout its entire ten minute duration.

There are other melodic moments as well, particularly when this classically-trained musician takes to the piano on closing track Autumn Hill, a work which recalls his mentor Brian Eno's collaborations with Harold Budd. Yet even Autechre obsessives – let alone Coldplay fans – might find the churning dissonance in Colour Eye or the title track's serrated teeth disorientating. But then Insides clearly hasn't been made to appeal to those who only know his name through association with Chris Martin and co; for no amount of reflected glory could ever fully illuminate Insides' mysterious depths. 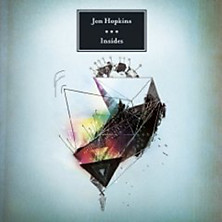