A wonderful, intimate and transportative new album from the German composer.

A neighbour who spends the night hours playing the same track at full blast is frequently the stuff of ASBOs and short notices in newspapers. Even worse would be the prospect of Cromer’s finest speed-metal troupe Bogan Boot moving in next door for all-night practice sessions fuelled by cheap cigs and bargain booze.

German-born musician and composer Nils Frahm, on the other hand, would make the ideal neighbour. It was in part to make sure he didn’t disturb the nocturnal rest of those around him that Frahm developed the calm intimacy of new album, Felt, by muting his piano. As he writes in the sleeve notes, "Originally I wanted to do my neighbours a favour by damping the sound... If I want to play piano during the quiet of the night, the only respectful way is by layering thick felt in front of the strings and using very gentle fingers." The result is a wonderful, intimate album that, while it won’t disturb the nocturnal respite of Frahm’s friends next door, provides the listener with nocturnal reverie.

It’s not just the soft, warm clunks of piano keys against strings that give this sense of having fallen inside Frahm’s instrument in a bucolic daze. There’s the quiet ambient hiss throughout, the rattle of the piano’s movement, the squeal of what sounds like fingers along metal strings in Kind, the odd flick and knock from elsewhere in the room. All this, of course, would be naught were it not for Frahm’s skill as composer and arranger. As pianist, he studied under Nahum Brodski, from whom the master/tutor lineage stretches back to Tchaikovsky. These are therefore no mere sound sketches, abstractions from Frahm’s night-time experimentation, but beautifully crafted and structured into a coherent whole. Old Thought, for instance, features woodwind, before the piano rolls in, as if a recollection of some fondly-remembered pastoral scene. Pause appears to be about to wind the record down into rest, before the urgent flutter of last track More, birds flying over chimney pots at dawn.

Felt is a transportative album, a balm for troubled minds. If he so wished, Frahm could surely drop a copy round to any neighbour in search of an insomnia cure. 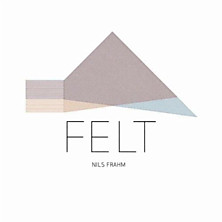