If the soundtrack from A History of Violence reminds you a bit of the Lord of the Rings' music, its not surprising. Both scores are for films exploring the nature of good and evil, and both were penned by Howard Shore, Hollywood's most Wagnerian composer.

But unfortunately the new score lacks both the epic sweep of the Rings' soundtracks and the memorable experimentalism of Shore's earlier Cronenberg outings (The Fly, eXistenZ, Naked Lunch). On the positive side, there is Shore's scrupulous instrumental characterisation, with a troubling French horn and a pure alto flute representing the moral struggle within the mysterious main character. And there are some beautifully polished individual scenes.

But overall Shore's music sounds deeply conventional, without the benefits convention confers. There is no strong theme to hold the score together, and a lamentable lack of pace or variation. Ultimately this is less 'dark and brooding' than 'dull and boring'. Send on the hobbits, please. 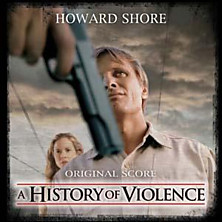