Adam Snyder Across The Pond Review

Snyder beautifully captures his experiences and observations makes them entirely...

Originally released in August 2003, Adam Snyder's debut album Across the Pond has been re-released for purchase as a download from his website.

Much has been made of the fact that Adam Snyder was keyboardist for Mercury Rev during their critically acclaimed Deserter's Songs period.However, on hearing the album, you realise that this association is somewhat irrelevant, not to mention completely misleading.In fact, if we're getting picky about this, Snyder only plays keyboards on two tracks on this album.

That said, on hearing his material you can definitely sense his influences within the Mercury Rev album.While Deserter's Songs delicately harked back to Americana, Across The Pond is positively steeped in it. Oddly enough however, the album is only available in the US as a rather expensive import from quite literally Across the Pond.

Snyder is a folk artist in the very traditional sense and often deservedly garners comparisons to Neil Young (''Two Moons'') and Tom Petty (''Leaves of Grass'').On occasion, his voice contains the warbly restraint that makes these comparisons so obvious yet a song like ''Mike and Me'' has a deep and earthy edge and ''Bare Bones'' is unadulterated white trash in the nicest possible way.

There is an enormous sense of warmth and openness on the album and a friendly mischief to songs like ''On Hold'' (about the misery of enduring hold music) and the comical ''Me and The Actress'' (apparently NOT a stalker song) which contribute to this. But there are also uplifting, radiant songs (''Up The River'', ''To All My Friends'') which can't fail to raise the spirits.

Interestingly, whilst researching this album, I received conflicting reports as to whether it was recorded in the US or London. It doesn't really matter; whilst its sound is deep in the heart of America, the way in which Snyder beautifully captures his experiences and observations makes them entirely universal. 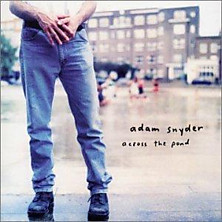