If all you know is ''Itchycoo Park'', bunk off school with this collection. Its all...

Together from 1965 to 1969, the Small Faces were the embodiment of Sixties London: four plucky, diminutive rascals from the East End, as wide as the Thames and as deep as the kitchen sink, rich in humour, impudence and high-octane energy. Steve Marriott, Ronnie Lane, Ian 'Mac' McLagan and Kenney Jones were pop's Bash Street Kids: naughty boys climbing the school railings and thumbing their noses at the establishment. They helped invent what we now think of as the Swinging Sixties, and this double CD tells their story.

Crucially, this is the first compilation to draw on the entire Small Faces back catalogue. It's all here, from the raw power of their early R'n'B releases, such as ''Watcha Gonna Do About It?'' and ''Sha-la-la-la-lee'' to their unique brand of late-Sixties Cockney psychedelia, typified by the sing-a-longa hits ''Itchicoo Park'' and ''Lazy Sunday''. All fourteen singles are included, along with most of their B-sides, plus a stash of tracks from their albums From the Beginning (1966), Small Faces (1967), the classic Ogdens Nut Gone Flake (1968) and the posthumous round up of hits and misses, The Autumn Stone.

The first CD, spanning the Decca years, emphasises what great songwriters Marriott and Lane were so early in their career. ''One Night Stand'' and ''I Can't Dance With You'' are superior versions of the blue-eyed R'n'B that so many beat groups of the period were producing. The influence of the Small Faces on the pop to come is clear: ''E too D'' has Steve Marriott rasping the blues like a young Robert Plant.

The band's releases on Andrew Loog Oldham's Immediate label make up the second CD. Here are the classic late-Sixties singles, ''Here Comes the Nice'', ''Tin Soldier'', ''Itchycoo Park'' and ''Lazy Sunday'' (how ''The Universal'' ever made it to seven-inch, though, is a mystery). The epic ''Afterglow (of Your Love)'' is, perhaps, Marriott's strongest vocal performance and ''The Autumn Stone'' one of his most tender moments. His tongue is firmly in cheek on the music-hall knees-up ''Happydaystoytown''. Mustn't grumble, though. ''Green Circles'' and ''Up the Wooden Hills To Bedfordshire'', from Small Faces, are classic British psychedelia. ''Get Yourself Together'' and ''Talk To You'', the flip to ''Here Comes the Nice'', are sound rockers with terrific hooks. If all you know is ''Itchycoo Park'', bunk off school with this collection. It's all too beautiful... 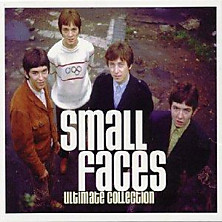