An expertly constructed debut LP from the José González-fronted trio.

Junip are perhaps most widely known for having amongst their number Swedish singer-songwriter José González, but their short history (this is their third physical release in five years) is rather rich in its own right. Quietly intense, occasionally foreboding songs (including an utterly stellar cover of Springsteen’s The Ghost of Tom Joad as the B side to an old single – Spotify it if you’ve a spare moment and a hanky) that González is known for are beautifully fleshed out by his bandmates Elias Araya and Tobias Winterkorn. On Fields the combination produce their strongest work yet.

They accomplish this by adhering to a formula for much of the record, but it is a strong one. That intense foreboding habitually begins as a González strum and builds so gradually to a climax of revolving musical ideas that by the time they get there the listener could potentially be a wreck. Premier amongst these is the genuine smoulder of Without You. The soft ostinati rise not powerfully, but viscously to demonstrate the song’s potency, a triumph of subtle dynamics. The ensuing summit, at around the four-minute mark, is felt in the guts and takes another minute to cool down from – this is expert construction.

When, on occasion, Junip deviate from this winning scheme of indie-folk success, the results are pleasantly off-kilter. Howl doesn’t quite emulate its title, but it is a novel re-imagining of the muted guitar shuffles of Carl Perkins or Chuck Berry, imbued with solemnity thanks to González’s delivery. Straying aside, Junip’s modus operandi remains those building ballads, with few finer than Don’t Let It Pass. There is a sweet resignation to it that recalls the dark Australian duo Sodastream and, though it is essentially light of tone, there is an unerring, sucking gravity to the circular guitar and vocal motifs.

A record that doesn’t deviate from what the listener might have already expected from an artist might not sound like an engaging one, but Fields most certainly is. When Junip are coasting along, their subdued virtues are impossible to ignore, but when they dare to lightly experiment the music is even more satisfying. In truth, more of these experiments with bygone forms would be welcome, but even dipping a toe in the water is enough to make a super recording. 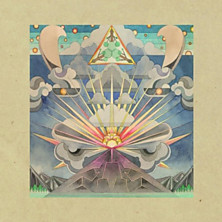