Jethro Tull This Was Review

An overlooked but essential piece of Tull.

The pace at which the music scene was changing in 1968 was, even when viewed from the luxurious hindsight of 40 years, a breath-taking explosion of creative intent that was as unpredictable as it was exciting. As the Summer of Love's psychedelic foppery gave way to something altogether harder and darker in both style and content, out of the ashes of the John Evan band, Jethro Tull emerged with their dead men's coats to heavy-up their act with a bite of blues rock and a precocious twist of jazz.

In this respect they were like many of the bands with whom they shared the bill all over the UK and abroad. However, what made Tull stand out from the great-coated crowd was the high-visibility of frontman Ian Anderson's on-stage Tourette's-inspired hyper-gurning and Mick Abraham's ferocious fretwork.

It's easy to forget that in its earliest incarnation Tull was not yet then Anderson's personal fiefdom, with Abrahams exercising just as much influence as his flute-playing pal. This is especially apparent on Disc One's BBC radio sessions where his blues roots are at their most pronounced. His playing throughout the record is superb though is heard to best effect on the rocking Dharma For One, and the Clapton-influenced Cat’s Squirrel. It's no surprise that when the split with Anderson forced him into a solo career with Blodwyn Pig that their debut (Ahead Rings Out) rivalled the top ten sales of Tull's 1969 follow-up, Stand Up.

Anderson's presence though is of course undeniable and extensive. Though his vocals are often delivered in an idiosyncratic pastiche of a grizzled blues veteran (especially on A Song For Jeffrey), the phrasing of his nimble flute adds a busy, waspish internal commentary within the songs. Sometimes however their reach exceeds their grasp. The cover of Roland Kirk's Serenade To A Cuckoo is a kind of bluffer's jazz that would give them a momentary exotic shift of gear in a live set dominated by their tumbling rock. It's a rather stilted execution here although one can't help but admire their chutzpah in attempting it.

As well the original mono version and some radio sessions, this anniversary edition is expanded to take a new stereo mix, and contemporary single A-sides (including their first single. Sunshine Day, for the MGM label where they were erroneously called Jethro Toe) and B-sides on Disc Two. Having already been given a remastering back in 2003, the new mix yields little surprises although a bit of 21st Century digital space allows a wider aural view of tracks such as Beggar's Farm, You’re Breaking Me Up, and Mick Abraham's wistful Move On Alone.

Embracing the broader vocabularies of progressive and folk styles was a brave move considering the Top Ten success of this sophomore release. By the time it came out they'd already moved on. ''This is how we played then – but things change'' Anderson wrote on the original liner notes in '68. Far-sighted words as it turned out. An overlooked but essential piece of Tull. 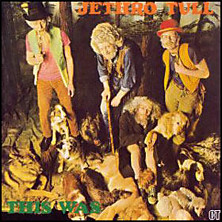