Sly & the Family Stone There’s a Riot Goin’ On Review

As the 1970s dawned, and Altamont, Vietnam and civil unrest signalled the disintegration of the hippy era, Sly & the Family Stone were in a similar state of disarray. Their riotous Rainbow Coalition of funk, soul and rock had captured the optimistic spirit of the psychedelic era. Now, though, leader Sly Stone spent countless unproductive hours in the recording studio, fuelled by a fearsome amount of illicit chemicals, recording mostly alone, with funk luminaries like Bobby Womack, Ike Turner and Billy Preston adding occasional instrumental assistance.

Released in 1971, There’s a Riot Goin’ On replaced the Family Stone’s bright and bold pop with a sound that was blurred by Sly’s endless overdubbing, murky but potent, as troubled as the times themselves. The grooves were edgy, restless: opener Luv n’ Haight was a desperate call-and-response set to fiercely combative licks; Thank You for Talking to Me Africa rewrote their upbeat 1970 anthem Thank You (Falettinme Be Mice Elf Agin) as a ghostly, enervated jam: still effortlessly funky, but unsettling rather than uplifting. The gonzo yodel-thon of Spaced Cowboy, meanwhile, sounds every bit as drugged-out and lunatic as the session which yielded it.

The song’s blend of painful wisdom and enduring hope (Sly’s croak of “Blood’s thicker than mud”) delivered the group a #1 single, but the parent album’s hazy, disquieting funk left long-term fans puzzled. Years on, however, There’s a Riot Goin’ On is rightfully regarded as a masterpiece for its unique sound, for its bleak tone and wasted mood, summing up the unease and menace of its era as perfectly as their earlier hits had captured the positivity of the late-1960s. 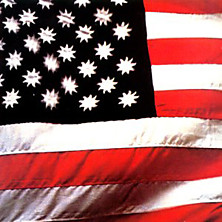