No other album has ever matched its morose magnificence.

In one of music's longest and strangest careers, perhaps the most peculiar twist of all was that – after six years of bombarding the world with giddy, oddball pop – it was 1989's Disintegration which propelled The Cure to true global success. After all, this is an album of near relentless gloom, dark grey in texture and sprawlingly epic in structure. It's not exactly Automatic for the People.

Its three million sales can partly be put down to the ferocity of their 80s fanbase, but mostly to its singles. The sexual-revulsion nightmare of Lullaby was the strangest of the three, but its sticky strings and peculiar addictiveness smuggled it into the UK top five. Pictures of You was more conventional, a glorious widescreen epic which Bono would have eaten his firstborn to write, while the downbeat but insidious Lovesong (written for Robert Smith's new bride, surely the most sullen wedding gift in history) even wormed its way into the hearts and top two of the USA.

But the singles are like the prettily twinkling peaks of icebergs, and the gloomy power of Disintegration is truly revealed in the vast slabs of synth-soaked, spectrally dense introspection beneath. Opening with the whimpering, windswept loneliness of Plainsong, and taking in the snarling, bass-driven misanthropy of Fascination Street and the shuddering, incantatory misery of Prayers for Rain, Disintegration is like taking a long bath in someone else's despair, and finding it cathartically enjoyable.

It is, of course, a touchstone goth album, with its relentless death imagery, dramatic sweeps of synth and eight-minute drowning-metaphor symphonies; but such is its single mindedness of intent and vanquishing beauty that it somehow avoids risible self-indulgence. And at its very peak – in the unbearably sad, hypnotically shimmering lament of The Same Deep Water as You and the raging tour of emotional destruction that is the title-track – no other album has ever matched its morose magnificence.

This being a deluxe reissue, there are the obligatory demos, live versions and out-takes. But although it's interesting to see how fully developed songs like Prayers for Rain were before Smith even took them to his bandmates, and the madcap B side Out of Mind deserves another chance to be heard, none of the extras rival the terrible beauty of the main feature. A beauty which has only deepened with 21 years and the knowledge that Robert Smith would never again be as ambitious, inspired and creatively courageous. 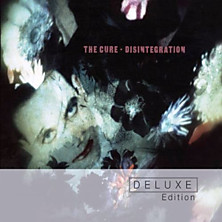