Love him or hate him, Kanye West is always intriguing, whether he’s flipping religion into a club jam or riffing on the Sierra Leone diamond trade.

There’s often substantial depth to his solo recordings, and even if the results aren’t always remarkable, there’s an overwhelming sense of passion behind each album. Kanye is honest with himself and his listeners, no matter the topic. Musically, he’s equally ambitious; many of his instrumentals help score our lives.

So maybe fatigue is a factor on Cruel Summer, a thin and largely unfocused effort that gathers his G.O.O.D. Music signees onto one album. While Kanye isn’t solely to blame for this dismal endeavour, he’s in charge, so shoulders most of the responsibility.

Throughout, featured contributors come across as contrived choices. Vocalists R. Kelly and Marsha Ambrosius sing about extended middle fingers and toting pistols. On Higher, The-Dream drones offbeat about being inebriated.

The Morning might be the biggest blunder. A song featuring Kanye, Raekwon, Common and Pusha T could’ve been the album’s centrepiece. Instead, a questionable hook and cartoony pop beat make it an afterthought.

And songs like Creepers (a Kid Cudi solo) and Bliss (a synth-heavy soul duet between Teyana Taylor and John Legend) sound like uninspired B-side filler.

But thankfully it’s not all bad. New God Flow, which reconfigures Ghostface Killah’s Mighty Healthy, is easily the album’s best track. On it, Kanye, Pusha T and Ghostface himself spit motivated verses over a dusty drum break and grim piano loop.

Mercy makes good use of meticulous drums and faint chimes, and Don’t Like is a raucous posse cut with Yeezy, Pusha, Jadakiss, Chief Keef and Big Sean. However, those good moments aren’t enough to save Cruel Summer, a recording of flashy excess that ultimately sinks into its own lethargy.

The oversized egos aren’t surprising here, but there’s no denying the disorganisation, as at least five of these songs should’ve remained on the cutting room floor. Kanye is an incredibly smart musician, so these results are truly baffling. Maybe he works better alone. 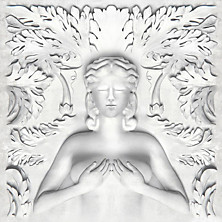