Karin Krog and Bengt Hallberg Cabin in the Sky Review

Krog is on absolutely top form, while Hallberg sounds just like himself.

The venerable Swedish pianist Bengt Hallberg will be 80 in September 2012, but he has been the doyen of Scandinavian pianists since the 1950s, when he was the accompanist of choice for visiting Americans Clifford Brown and Stan Getz. Recently he has performed less often, but he still has plenty to say, with the added bonus that in whatever style he plays, he sounds like himself — a mixture of gentle swing, great sensitivity and occasionally startling originality. On this new duo album recorded in August 2011, he is teamed up with Norway’s finest jazz singer Karin Krog.

Krog may be best known for her experimental collaborations with John Surman, but as she proved last year in London, she is a superlative interpreter of standards. This summit meeting dusts off some less well-known corners of the repertoire, and also shows two musicians who like to dig deep into chord sequences and lyrics, to get a lot out of even the simplest song. Karin’s own Who Knows draws some delicate playing from her accompanist, as she catches a wistful mood of Nordic melancholy. But there’s a joyous side to the collaboration too, the pair celebrating their own history of recording together sporadically since the 1980s. So, for instance, the opening Just You, Just Me digs into stride piano, boogie patterns and scat singing, as well as presenting carefree lyrics with a great sense of fun.

Once or twice Hallberg seems to falter momentarily, lacking the flawless fluency he had had half a century ago, but the quality of his ideas surpasses any tiny frailties. Meanwhile he has Ms Krog on absolutely top form, clearly relishing the chance to investigate the subtleties of Ellington’s Prelude to a Kiss as well as to romp through such staples as Give Me the Simple Life. 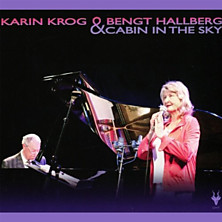