A loose convention, when it comes to jazz does classical, is that there are lots of layers, counterpoint, and interlocking motifs. Expansion rather than reduction of sound is the order of the day. Yorkshire bassist Jenni Molloy bravely reverses the trend, opting for the relatively naked setting of a bass-drums-sax trio where the absence of the expected piano is very much an asset rather than liability.

There are wide open spaces that are further widened by the sparse work of tenor-soprano player Stuart MacDonald and drummer Chris Sykes, the latter working a small kit a la Leon Parker and opting to focus on one area for lengthy periods, so that the minimal deployment of cymbals and toms on some tracks lends a dry patter to proceedings. This entirely suits the general sobriety of the prevailing atmosphere. That said, Molloy is not just putting Bach through the improviser’s merry wringer but taking fragments of suite and partita, a slice of a sarabande or a snatch of allegro, and spinning them into new compositions that also have classic reference points from Wayne Shorter to Miles Davis to South African township chorales.

Clocking in mostly at 10 minutes, each piece is mindful of the great clarity with which Bach constructed narrative light and shade, and thus wheels through many movements in its life cycle. All of the players, particularly Molloy, who has a rich, deeply statuesque tone that approaches that of a veteran such as Buster Williams, proceed with enough focus and thrust to imply a larger orchestral sweep while retaining the tight cohesion of the trio format. But then again MacDonald drops out often enough to let the leader enter into a duo formation with Sykes and state a theme that he later picks up and doubles, so that the melodic and rhythmic roles are constantly shifting a la jazz even though their eloquence is precision a la classical.

As many other improvisers have shown over time, Bach is a lot to play and more to play with. Molloy handles both with impressive authority here. 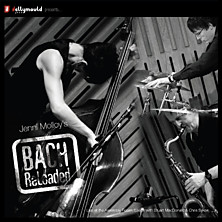