Page Hamilton and company seem to be stuck in a state of limbo.

Post-hardcore has become such a broad and muddled term, it almost doesn’t do Helmet justice to refer to them as one of its pioneers. Still, anyone who remembers their mix of choppy riffs, broken melodies and articulate aggression producing a string of seminal albums during the 90s would find it hard to reject that notion.

Proving they had more in common with Unsane than Quicksand by being unable to resist a reunion in 2004, Helmet’s second phase material has so far suffered from inevitably sounding like they were both revisiting former glories as well as coming across as slightly dated, regardless of the fact that they’ve cranked the aggression back up since 1997’s maudlin and masterful then-swansong, Aftertaste. Mainmain Page Hamilton’s adopted new bandmates and a slightly higher pitch when he sings and screams, but much of the rest has stayed the same.

The good news is that Hamilton’s discontent still makes him an irresistible malcontent at times. So Long is the soundtrack to a marriage unravelling like a length of razor wire, while LA Water eventually breaks down to reveal a soaring, almost pop-like quality that paints a sheen over something much darker. Beyond that, string-infused interlude Morphing mainly highlights the stomping, suffocating pace of much of the rest of the album. And Your Bird Can Sing is another successful stab at lending a greater amount of melody, but it also highlights a nagging quality to Helmet’s music these days: they have one foot planted in the past while looking to push forward.

There was a question mark over whether Hamilton’s muse would have been better served by adopting a new moniker to go with this band. It’s not a question of him stepping away from an impressive legacy, rather giving him the freedom to fully explore his creative urges. A jazz-trained musician who has previously contributed music to films, including Michael Mann’s Heat, and toured with David Bowie, he certainly has the capacity to achieve such goals. In the, ahem, meantime, albums like Seeing Eye Dog have their appeal, but quite often sound trapped in limbo. 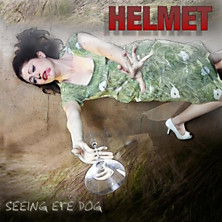