A recommended release, recorded with clarity and natural balance.

Rising young star David Fray considerably enhances his growing reputation with this release of two Mozart piano concertos, Nos. 22 in E flat, K.482 and 25 in C, K.503. Mozart’s music requires considerable maturity (in outlook, if not in years), its graceful refinement offering artists nowhere to hide. Many an experienced pianist has fallen off the tightrope between blandness and distasteful imposition; achieving artlessness in Mozart is a great art in itself. On the basis of these recordings, Fray has an instinctive Mozartean affinity – he communicates fresh ideas with subtle, stylistic deftness.

Following an ebullient orchestral introduction, the piano’s first entry in K.503 is almost hesitant, pulling back slightly as if testing the water before fully committing. Having taken the plunge, Fray wholeheartedly embraces the sunny mood – but not without further pauses for thought. In other hands, and with a different conductor, Fray’s use of rubato – such as in the first movement’s wistful second subject – may have jarred; but, thanks to Jaap van Zweden’s alert direction, the overall flow is never impaired. Throughout, Fray and Zweden work together with remarkable symbiosis.

The piano sings beautifully in the mellow Andante of K.503, Fray unafraid to stretch the tempo expressively but never self-indulgently. Some performances of the finales of both concertos have greater sense of abandon, but Fray and Zweden’s more reflective approach – still lively and always spontaneous-sounding – is every bit as convincing. Fray gambols up and down the keys with joyful lightness; moments of heightened drama are given due weight.

Mozart’s festive trumpets-and-drums scoring (plus clarinets in K.482) can be flabby and sluggish on modern instruments, but not here: the Philharmonia boasts an unashamedly fulsome sound, but its stylish sensitivity and crisp articulation ensure sparkling buoyancy. Delightfully idiomatic woodwind solos stand out impressively. Zweden’s generally agile tempi keep things moving; only the slow-paced minuet in the finale of K.482 lacks momentum.

Good on Fray for not choosing the overplayed minor-key concertos first – although hopefully it won’t be long before we get to hear more. His choice of cadenzas is also interesting: Freidrich Gulda’s in K.503 are nicely understated; Edwin Fischer’s bold Beethovenian flourishes in K.482 are a touch incongruous, but Fray plays them with enjoyable relish. Recorded with clarity and natural balance, this is thoroughly commended to all Mozart-lovers, however many recordings of these concertos you already own. 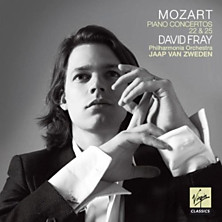