Steve Tibbetts A Man About A Horse Review

Guitarist Steve Tibbetts with his first album for ECM since 1993. Buddhist heavy metal...

For the last 25 years or so Minnesota based guitarist Steve Tibbetts has been quietly producing records that sound like nothing much else. Imagining a kind of 'Fourth World' music (though his own suggestion is 'post modern neo primitivism'), Tibbetts combinesAfrican and Asianpercussion, field recordings, ambient soundscapes and avant metal guitar heroics in a richly atmospheric brew.

For some reason Tibbetts seems to go largely unnoticed by those who slavishly follow every twang from the likes of Bill Frisell, Terje Rypdal or David Torn, and he certainly hasn't received the kind of praise reserved for crosscultural fusioneers like Jon Hassell or Michael Brook. Though this album (his first for ECM since 1993's The Fall of Us All) is unlikely to buck that trend, there's much to savour here for both the newbie or committed fan.

Before recording this album, Tibbets had an accident involving a ladder and some wasps, and as a result was scheduled to undergo an operation on his right hand. Uncertain of the outcome but certain of a couple of months away from the fretboard, he sat down the night before going to hospital and recorded his guitar parts in one sitting, and in the process has come up with some of his most inspired, fiery playing.

From the opening acoustic lilt of "Lupra", through to the restless soundscaping of "Black Temple" (prog rock gamelan on acid) or "Chandola", his skilfulgluing together of disparate elements is such that he avoids mere po-mo cut n' paste job; the whole is beautifully organic and never less than gripping, whether hovering on the verge of audibility or nudging the meters into the red. As the percussive swirl of "Koshala" fades to blissful atmospherics, it seems that the album's 45 or so minutes have gone by in about 10.

Devotees will know what to expect and won't be disappointed; anyone else interested in the kind of names mentioned above is likely to be surprised, captivated and converted. Brilliant, individual musicmaking. 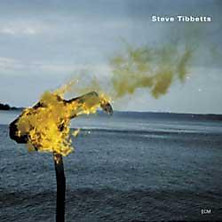