The third album from Gothenburg’s connubial percussion and vocal duo Mariam Wallentin and Andreas Werliin began life as two, 12” vinyl EPs released earlier this summer. Now spread over a brace of CDs – named Retina and Iris, respectively – Rivers is a fully-fledged album, echoing the EPs’ division between imposing, choir-enhanced songs (Retina) and haunting, steel drum-propelled essays (Iris), all of it themed around notions of reflection, light and water.

Recorded in a week in Reykjavik, this is music inevitably imbued with Iceland’s stark grandeur and glacial eeriness; even if Wallentin’s strident but wounded vocals retain a distinctive bluesy quality (albeit a blues closer to the funereal ceremonials of Diamanda Galás than Muddy Waters). Retina’s opener, Bleed Like There Was No Other Flood, sets the first disc’s tone; the wordless descants of the 12-piece Schola Cantorum Reykjavik Choir, arranged by cellist Hildur Guðnadóttir, interleaved with numinous poise behind Wallentin’s oceanic incantations (turtles feature heavily) and Werlinn’s precise, airy percussion.

Tiny Holes in This World repeats the formula, the choir adding further layers of monastic atmosphere which contrast with Wallentin’s worldly “I want to lie down with you” invocations. Fight for Me is the most clamorous thing here, with Werlinn’s pounding tom-toms to the fore, the choir verging on dissonance and Wallentin’s vocals at their most theatrical – it’s reminiscent of My Brightest Diamond’s Shara Worden in seriously spooked mode. Peeling Off the Layers’ martial snare drums and sermon-like lyric (“Water Will Keep running / Rivers will turn) is as strangely beguiling as it is inscrutable.

The second disc eschews the choir but welcomes Wallentin’s steel pan – an instrument more associated with bubbly Caribbean party music than desolate, Arctic Circle wistfulness. Using it to play minimal, repeating patterns, she leads pensive, introspective essays The Wave and The Drop, while Werlinn busies himself with miscellaneous orchestral percussion oddities. Unlikely tropical intimations pervade the otherwise brooding The Course, lending an ominous song about giving away “a big piece of my black heart” an incongruous jauntiness, while closer The Well blends further loquacious steel percussion with the unbridled attack of a full drum kit, to more characteristically stirring effect. 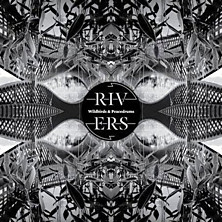