Between the release of the band’s first, eponymous album and this, their second, Led Zeppelin had completed four US and UK tours. Thus II, by necessity, was recorded on the road in the States and while it received many tweaks before it reached the shops it still has a live feel that few rock albums have ever come close to. Engineer, Eddie Kramer, uses his expertise in taming the live guitar for the confines of a studio as Robert, Jimmy, John Paul and John rip through their raggedy book of blues standards and poppier exercises in sword and sorcey–tinged rock folk.

Unsurprisingly the album contained what would become the some of the band’s defining live statements. ''Whole Lotta Love'' was born to be played live. For hours. Its truncated studio cousin just replaces the rockabilly medleys with swooping theremin and rattling toms. The riff was pilfered (from Willie Dixon) but still mighty. ''What Is And What Should Never Be'' demonstrates what Jimmy always used to burble on about in interviews about 'using light and shade'. It’s quietly jazzy and pastoral, and then in the chorus it rocks like a mother. See also ''Ramble On'', with added Tolkien references. ''Thank You'' is a nod to Plant's West Coast predelictions.

This leaves the rockers like ''Heartbreaker'' (again a fine platform for a lengthy stage work-out), its lightweight follow-on ''Livin' Lovin Maid'' and the blues molestations. Oh, and ''Moby Dick''. Probably the result of limited time to present product to 'the man' at Atlantic, the band included this 4-minute romp across the skins by Bonham. It ain't pretty though its low-D riff is, again, a monster.

Mind you, the blues molestations more than make up for this slightest of hiccups. ''The Lemon Song'' (Howlin’ Wolf’s ''Killing Floor'' slowed down and sleazed up) is a great demonstration of how, live, Zeppelin locked together like no one else, making all resistance impossible. ''Bring It On Home'', Sonny Boy Williamson's already sleazy slouch is here picked up by the scruff of the neck and kicked across the room by Jimmy's new, turbo-charged riff. This is the sound of a band having its last major tussle with the genre that gave birth to them: The Blues. From this point on they'd be nobody’s band but their own. 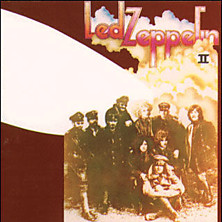