With an excess of review fodder dropping through the mail slot on a daily basis, it is always heartening to be presented with a release that does not fit neatly into standard categories. And the debut long player from Submotion Orchestra definitely is out on a limb of its own.

I can’t say this electro-cum-nu-soul mishmash was really on my radar beforehand, save for a whiff of approval from Gilles Peterson for an early single. But I have since learned that the collective is based in Leeds, and came together partly in response to an Arts Council commission for a live dubstep work to be staged in Yorkminster Cathedral. Only happen in Britain, right?

At the core of the group is noted producer/DJ Ruckspin and drummer Tommy Evans of Gentleman’s Dub Club. The supporting cast includes experimental jazz trumpeter Simon Beddoe, likeminded keyboardist Taz Modi (of Monkey See Monkey Do), salsa-fied percussionist Danny Templeman (who has worked with both Macy Gray and Andre Tanker), and London-based bassist Chris ‘Fatty’ Hargreaves. And the icing on the cake takes the form of vocalist Ruby Wood, whose sweet jazz and soul tones inject an aspect of melodic moodiness, despite often sounding at odds with the backing material.

Finest Hour has been cut in magnum opus mode, so there is no real break between tracks, giving the work a seamless quality, even as it drifts between genres. Broody opener Angel Eyes begins with full orchestration before dropping down to drum’n’bass basics; Back Chat starts out sounding like Richard Clayderman attacking Nadia’s Theme, until raspy bass warbles soon remind that we are heading for the dubstep zone. Always has a pick’n’mix feel, and Hymn for Him has down-tempo minimalism; All Yours could be Sade gone acid, while Pop and Lock and Secrets merge skewered jazz and broken d’n’b to fine effect. And even if songs like Suffer Not and Finest Hour seem unnecessarily sentimental, the dub-wise element of each lends a sensation of infiniteness. By the time we reach the closing Perfection, the journey has been a quietly bewildering one, becoming only marginally more familiar on another spin.

Though I have not had the pleasure of seeing them perform yet, the unit are said to be able to skilfully replicate the experience live. If you have even a passing interest in dubstep or avant-garde jazz, this intriguing debut suggests the group as one to keep an eye on. 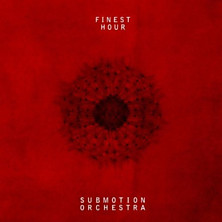