In her memoir, Paradoxical Undressing, Throwing Muses lead singer and songwriter Kristin Hersh describes bands that are like candy, "fun and bad for you in a way that makes you feel good". Hers, by contrast, is "spinach, I guess. We’re ragged and bitter. But I swear to god, we’re good for you."

Formed in Providence, Rhode Island in the early 1980s, Throwing Muses were first US band signed by 4AD. They were one of the most inventive bands of the late-80s boom in ‘college’ or ‘alternative’ rock – but those pigeonholes fail to convey anything of their concise, mercurial, hook-laden psychodramas.

Given the band’s attitude towards conventional music business manoeuvres – somewhere between distrust and disgust – it’s no surprise that Anthology isn’t a traditional greatest hits album. Nearly all the band’s best known songs – Dizzy, Counting Backwards, Not Too Soon, Firepile – are absent, the tracklist representing personal favourites. Just one song features from their breakthrough album, 1991’s The Real Ramona.

Dizzy’s absence is no surprise. The unrepresentatively goofy song, from the band’s least impressive album, 1990’s Hunkpapa, is their Shiny Happy People. As Anthology shows, this is a band at its best when marrying the associative tangle of Hersh’s often striking lyrics ("I sing about dead rabbits and blow jobs," in her self-deprecating analysis) to shifting time patterns, jangling dissonance, and sudden rays of melody. Hersh’s stepsister Tanya Donnelly, who left the band in 1991 to join the Breeders and later form Belly, wrote some great Throwing Muses songs, but their conventionality always sat awkwardly beside Hersh’s work.

Throwing Muses are an island band. Water imagery recurs, and experiencing their best work is much like being turned by a wave; a big roller that leaves you, battered and elated, a good distance from where you started. The number of these moments on their first few albums and EPs, from 1986’s self-titled debut through to The Fat Skier EP and 1988’s House Tornado, is astonishing. This period dominates half of Anthology, and represents the high point of a nearly constantly impressive body of work.

There are occasional flashes of familiarity, usually from Throwing Muses’ contemporaries: the first section of Marriage Tree replicates the knotty intricacy of Guided By Voices; traces of Jane’s Addiction at their most incantatory attach to A Feeling; and Two Step’s lugubrious surf guitar nods towards Pixies, who played support slots at Throwing Muses shows on the Boston club scene. These atypical moments only emphasise the unique shapes of this music. Most of the time, from the banshee screeches that claw through the aching ballad Hate My Way to the nervy energy of Fish, Throwing Muses are their own and only context. Hersh once told a friend, "I’d rather be good in private than bad in public". Here is a powerful public reminder of just how good her band’s somewhat neglected legacy is. 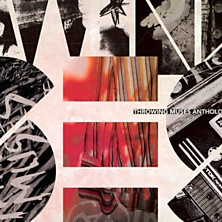