It remains his crowning achievement.

Within two hectic years James Marshall Hendrix had gone from playing Greenwich Village nightclubs for food money to unofficial head freak of the Underground. Two albums of pshort psharp psychedelic class had alerted the public not only to his Strat-mangling prowess, but also his innate grasp of great songwriting. By 1968, however, things had started to turn sour. Hendrix was growing sick of the endless tours (along with the endless calls for party tricks like playing the axe behind his head/with his teeth etc.) along with the constant requests for new material.

To make matters worse, his manager/producer, Chas Chandler – the man who had rescued Jimi from obscurity in New York and brought him to London - was, himself, getting sick of the entourage surrounding the guitarist’s every studio session and the call for endless takes which accompanied the Herculean intake of chemicals. Early into the recording of Electric Ladyland at New York’s Record Plant he walked out, leaving Jimi creatively free but shackled to a dubious manager and with no one to rein in his more self-indulgent tendencies.

Luckily Hendrix, on a creative peak, was still focused enough to turn ...Ladyland into as close as a perfect album as was possible. His relocation to the States meant that tracks like “Long Hot Summer Night” and “Crosstown Traffic” and “Come On” retained their sense of technicolour pop while drawing more heavily on the soul and blues music of his homeland. His restless search for new sounds had both his guitar techs and studio engineers running to catch up with his vision of ‘Earth Space music’. The results were both spectacular and, to this day, just about as cosmic as anything ever placed on magnetic tape. Two epic tracks demonstrate the two sides to Hendrix: the bluesman and the cosmic gipsy. “Voodo Chile” is a 15-minute superstar jam (with Traffic’s Dave Mason and Steve Winwood, and Jefferson Airplane’s Jack Cassidy standing in for an increasingly alienated Noel Redding on bass). Its late night looseness never gets in the way of Hendrix’s astoundingly inventive soloing. Meanwhile “1983...(A Merman I Should Turn To Be)” is a stoned classic, utilising washes of backwards tape, jazzy timeshifts and far out fish-friendly lyrics to tell the tale of future apocalypse and return to the oceans.

On top of these you get the sumptuous Dylan interpretation of “All Along The Watchtower”, the hard rock wah-wah fest of “Voodoo Chile (Slight Return)”. Even the inclusion of a previous b-side, “Burning Of The Midnight Lamp” showed that at this point Hendrix knew exactly how to sequence an album. Unfortunately this was to be his last completed studio effort before both business and pleasure took their toll, but Electric Ladyland remains his crowning achievement. 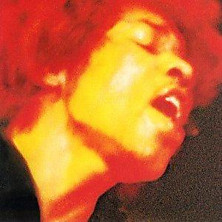