A group that could evolve into a significant force in contemporary jazz.

Minutes into their set at the BBC Introducing session at the 2012 Manchester Jazz Festival, the snappy, sparky young Leeds-based trio had the venue bobbing. Their debut exerts a similar appeal, right from its opening salvo Deep Heat, as drummer Luke Reddin-Williams, guitarist Luke Wynter and tenor saxophonist James Mainwaring create trance by way of rhythm.

All three play sharp, taut lines that have a staccato if not stuttering quality, yet unleash a sizeable energy rush through volleys of needling four-, six- and three-note phrases that relentlessly and seamlessly shift position as the piece unfolds. It has to be said that this is a tried and tested strategy and, certainly in the last three decades, countless musicians, led by Steve Coleman among others, have done as much.

But Roller Trio, to their credit, have marks of distinction, the most engaging of which is a clarity and relative agility in the ensemble sound. Some ears may be left wanting by the fact that Wynter doesn’t always bolster the songs with thick chords, and thumbs low register lines that are understated rather than emphatic, but that reflects an embrace of space rather than a fear of it.

Wynter’s slightly airy, grainy guitar figures can be plaintive in a way that brings to mind the Hungarian veteran Gábor Szabó and reinforces the gypsy subtleties in some of the arrangements. Furthermore, Wynter’s use of electronics is, and this holds for Mainwaring too, well measured and refrains from excessive distortion or pitch shifting.

As is the case with most first albums, this nine-track set has a few moments where the ideas come up a touch short and the dynamics are not as pronounced as they could be. Nonetheless Roller Trio feels like a group that could evolve into a significant force in contemporary jazz because it has a grip on popular culture – the grooves have hip hop, funk and rock resonances that suggest an interest in what’s happening outside of improvised music – that does not attenuate any lateral thinking. 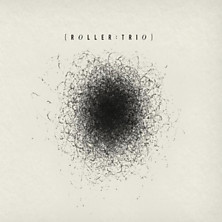