The Rolling Stones Out Of Our Heads Review

They were becoming something both beautiful and scary.

By 1965, when the bulk of this album was recorded pop acts of the day were accustomed surfing an alternating tidal wave of hormonal acclaim and establishment distaste. Yet the pop market was a fickle thing with no guarantees about how long there success might last. We look at The Stones, now in their dotage and still managing to scare the horses, and look back on their rise as being inevitable. However, acts like Herman’s Hermits were actually shifting more units than The Stones at the time (they knocked “Satisfaction” off the US number one slot!) and the moral panic surrounding the group meant there was nothing predictable about their longevity at all.

What began to put distance between The Stones and their lightweight package-tour companions was their growing ability to write their own material. Whilst the Jagger and Richards team had penned a few ditties there was nothing that they could really call their own, as the rabble-rousing R&B potboiler “It’s Alright” “The Under Assistant West Coast Promotion Man” and “One More Try” ably demonstrate.

That all changed when they holed up in an LA studio between live dates. “The Last Time” welded together all their experience to date into a glorious cavernous swirl that revolved around one of pop music’s truly great riffs. Recorded in the same session but at the other end of the dynamic spectrum was “Play With Fire,” elegantly articulating the subtle frictions of London’s social classes rubbing shoulders and more besides: grown up social commentary to a harpsichord accompaniment no less!

As was the custom, none of these singles appeared on the original UK pressing of the album, and their presence on this 2002 reissue overshadows this clutch of capable cover versions. What the likes of “Mercy Mercy” and “Good Times”, and “Cry To Me” lack in inspiration, they compensate with admirable perspiration, though Jagger’s cavorting truculence is clearly outgrowing such sedate vehicles as these.

Whilst “Satisfaction” consolidated things, it’s “The Last Time” which represents the peeling back of their vestigial R&B persona, to become something that would be both beautiful and scary. 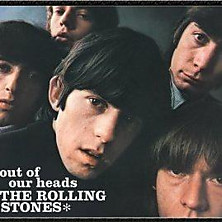