If the history of popular music is a history of hybridisation, then Burnt Sugar are its recombinant high priests. Musical styles clash, dovetail and coalesce throughout this and the group's previous releases.

A case in point, "Fear" goes for a slow and sedulous run-through of yawling dismay courtesy of singer Lisala Beatty, until a heavy, black metal riff slams in out of the blue night accompanied by Justice Dilla-X who sounds like he's cussing from beyond hell's fires.

Miles Davis's polymorphous spirit is invoked by the Sugar's twin versions of Get Up With It's "Mtume". Version one pins the original on a dissecting table and teases out its organs for study while its spirit rises up and hovers uncertainly over proceedings. Version two resurrects the original's tumbling rhythm, even going so far as to insert a wah trumpet blown by Lewis 'Flip' Barnes.

"No Direction Home" on the second cd sounds like the bastard lovechild of Miles Davis's "Right Off" - particularly the rollicking, bass-driven rhythm - and the long intricate guitar forms of Starless and Bible Black-era King Crimson. The brief breakdowns between episodes (it's a seven part, 28 minute long piece) are pure dysfunctional noughties though. The final part moves into an elegiac Thembi-era Pharaoh Sanders, full of welling piano arpeggios and soulful cries.

Burnt Sugar's music is oceanic, and there's been no sight of a shoreline since they set sail in 1999. Initial listening to Black Sex Y'all in its entirety may be exhausting - no smooth studio jam or cold conceptual experiment, the level of ambition and concomitant length (almost 140 minutes) raises the spectre of indulgence, but breadth and scope are central to the group's endeavour.

Much of this drive may be attributed to the group's leader Greg Tate, perhaps best known as cultural commentator and hawkish observer of cultural transactions between Africa-America and other races. In simultaneously looking back to the electricjazz of the 1970s and forward to remix culture, ambient soundscaping and hiphop, Burnt Sugar's music acts as both reclamation and launch into the unknown. Black Sex Y'All is a riotous, fecund crowd of a record, a melting pot of ideas whose ingredients appear to be mutating into new flavours even as they fade out.

Both cds end in lengthy spun-out remixes, ambient odysseys and versions - as if on the one hand questioning the purposefulness of the preceding enterprise, while on the other emphasising the mutability of the music, the impossibility of achieving a final state. In this there is a note of singular affirmation. 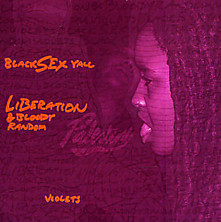