If you want to release some good time rock 'n' roll, listen to this album.

Cage The Elephant is a Kentucky five-piece, known for wreaking havoc wherever they lay their guitars. It’s also the name of the first album from the explosive band, which was recorded, in true garage style, in 10 days. There's no over-production or waste on this gritty piece of rock and it shows the band to have the exuberance of The Vines, the social relevance of Hard Fi and the slide guitar of Beck…

More succinctly, ''It sounds like a punch in the face,'' says singer Matt Schultz. In One Ear is a definite two fingers up at the music industry (''I'm an antisocial anarchist who sounds like so and so… Rocknroll is dead I should have stayed at school'') and Ain't No Rest for the Wicked, the second single from the album, certainly makes you sit up and take notice. It's a sing-along rhythm and blues anthem for the disaffected. Expect to be hearing this blast out of cars for weeks.

Matt and his guitar-playing brother, Brad, have had some musical catching up to do. Having been brought up in the Christian south, they didn't get to listen to much varied music as children. This doesn’t stop them citing influences as diverse as Bob Dylan (well, you've got to haven't you?) and Jay-Z, as well as...erm, Kenny G on their MySpace page. Mind you, Back Stabbin' Betty has a certain funky, strutty, Iggyness to it. Mostly, though, they sound like so and so.

Whilst the plucky intro to Judas makes you want to get up and dance, the refrain is more soulful. Thankfully the drumming of Jared Champion kicks in with the multi-layered chorus, leaving your emotions all over the place in one fell swoop.

And the name? In one interview they explained it comes from Indian philosophy where the elephant is the symbol of strength and goodness. ''It seems like people want to cage the elephant'', they said, ''it seems like they want to cage all the good in the world''. If you want to learn more about Indian philosophy read the Upinishads, but if you want to release some good time rock 'n' roll, listen to this album. 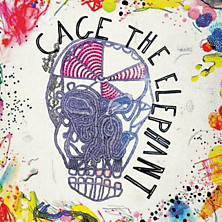