An unassuming, yet consuming album from the impressive Ferrard.

Half-Scottish, half-American, David Ferrard has quietly built an impressive reputation in Britain in the under-subscribed niche of politicised songwriting.

With this second album, however, he puts his own songs on ice to delve deep into the American side of his roots, recording in a tiny studio in the Blue Ridge Mountains of North Carolina with multi-instrumentalist Josh Goforth to capture the intimacy and charm of the old-time mountain music that represents the core of his style on this unassuming, yet consuming album.

It’s quite a revelation. With his tousled hair, boyish looks and gentle voice, Ferrard would appear ill-equipped to get under the skin of music with such a profound history. But the lovely picture of his great-great-great grandparents which adorns the inner sleeve sets a mood of authenticity, which he effortlessly matches. The songs are mostly traditional, but they carry a clear resonance for Ferrard as he sets off on a journey which eventually takes him far from Scotland, yet retains plenty of scope for social commentary.

Driven by Goforth’s evocative fiddle, opening cut Peg and Awl rues the industrialisation that costs a shoemaker his livelihood before moving on to one of Robert Burns’s lesser-known songs, The Slave’s Lament. Uncluttered arrangements and the endearing simplicity of Ferrard’s delivery make a touching conduit for the themes of alienation, emigration and oppression that are the album’s subtext.

There are a couple of anguished contemporary songs by Dunbar writer Kenny Brill – Gilmartin deals with the Scottish clearances and SO9 Monktonhall is an emotive depiction of life in the mines – while The Jute Mill Song is set around a plaintive banjo to address the dark realities of child labour in Dundee’s jute industry.

It’s a bleak record, but not suffocatingly so. Ferrard bravely masters an unaccompanied vocal on the beautiful love song My Dearest Dear, has a commendable crack at Doc Watson’s definitive version of A-Rovin’ on a Winter’s Night and neatly ends on an optimistic note with Stephen Foster’s classic Hard Times Come Again No More. Whatever else, Ferrard doesn’t lack courage or imagination. 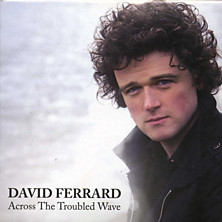