The sound of a musician rapidly nearing a creative peak.

Jazz and rock collided to become jazz-rock in the late 60s, but these days the two genres, by way of anybody from Seamus Blake to Christian Scott, have renewed their liaison to yield something other than ‘fusion’, a sound that actually feels more like rock with a higher standard of playing.

Theme rather than variation, or extended improvisation, is the order of the day. After making a series of impressive albums that trod a quite deft line between post-bop, chamber and Afro-Asian music earlier in the decade, New York bassist Ben Allison slides skilfully towards this terrain. His melodic, slightly folkish material is executed by a fine band whose relatively unusual frontline of trumpet, guitar and violin brings an instantly noticeable sonic novelty to the table.

Wistful minor key signatures and wry, slurred tones, especially from the artfully handled strings – violinist Jenny Scheinman, a valuable contributor to the music of Bill Frisell among others, produces some startlingly creepy nails-on-the-blackboard glissando – create an intriguingly sombre, almost gothic tension that is effectively enhanced by the velvety, spare and incisive phrases of trumpeter Shane Endsley, who at times has a touch of another Frisell accomplice, the great Ron Miles.

It all amounts to emotive songs in which a brass player replaces the singer. Only on occasion does the interest dip, primarily because there is a suggestion of either a call-and-response chorus or counterpoint that doesn’t materialise. But Allison’s writing has a smart thorny-tender quality as well as more rhythmic nuances than one clocks on first hearing – his incorporation of an African pulse is done with a subtlety that evades most, and he often kneads percussion into the strings rather than the drums.

In his formative years Allison showed that, despite his marked allegiance to the ‘tradition’ of Nicholls, Mingus et al, there was a progressive, lateral side to his ideas. Think Free sees him decisively shuffle the pack – texturally and compositionally – all the while retaining something of himself, the sign of a musician rapidly nearing a creative peak. 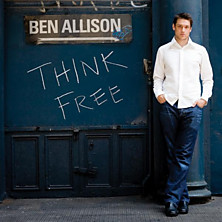