The Who The Who Sell Out Review

...pretty tame by The Who’s standards, and lacking stylistic coherence.

Whatever the arty origins of their auto-destruction stage act may have been, the resulting column inches from those exploding drum kits and wrecked amplifiers demonstrated that The Who were one of the most media-savvy bands around. Their grasp of the importance of image comes as no particular surprise given Mod culture’s attention to personal grooming and having the correct look at all times. Pete Townshend once said that the idea of interspersing the tracks of The Who Sell Out with radio jingles came from a desire to disguise what he felt was a weak collection of songs. Thus the iconic cover and the audio adverts conspired to become a satirical swipe at rampant consumerism – hey presto, a concept album of sorts. Well, almost.

Ironically, the album is an advert of sorts for their follow-up record, containing as it does, many of the seeds that would flower into Tommy. Townshend was partially right about some it not being up to scratch. John Entwhistle’s “Mingy Stingy” and the psychedelic “Armenia City In The Sky” (written by Speedy Keene, later of Thunderclap Newman and Motorhead producer, trivia fans), as well as his own “Mary Anne With The Shaky Hand” and “Our Love Was” may well be innocuous tosh but tosh nevertheless.

Things get on firmer Townshend ground with the tongue-in-cheek tale about the nature of masculinity, “Tattoo” which has such a glorious uplifting melody that Roger Daltry could’ve sang lines from the Yellow Pages and it would’ve been just as spine-tingling. The plaintive “Sunshine” (with its hint of “Pinball Wizard”) is an attractive enough love song, and like “Rael 1” - the album’s only true concept track - shows his keenness to extend his craft and serve notice of the shape of things to come. Generally though, things are pretty tame by The Who’s standards, and lacking stylistic coherence.

The exception is “I Can See For Miles.” Its glowering presence overshadows everything else here. The rumbling salvos of Keith Moon’s tom-toms brilliantly herald the cathartic release of the song’s pulsating, obsessive chorus. A classic chunk of Who and a highpoint in 60s pop. 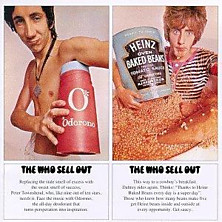