An artfully executed study in composition and improvisation.

When John Coltrane’s unstoppably torrential solos were poeticised as “sheets of sound” back in the 60s, the idea that jazz was the ultimate music of flourish and expansion was given some noble letters. However, it is often overlooked that the very same musician exercised admirable restraint on many of his ballads, and that an economic use of pitches, or an awareness of the space between them, was a guiding principle of the work of Coltrane’s illustrious colleague, Miles Davis.

This second album by drummer Tyshawn Sorey, the successor to his adventurously idiosyncratic 2007 debut, That/Not, is an artfully executed study in composition and improvisation in which high drama is created by the most precise of details, the most fleeting of structural movement. Think ‘specks of sound’. Sorey has already proved himself to be a rhythmathematician of considerable skill through his work with such as Steve Lehman, Vijay Iyer and Steve Coleman. But here, in the company of guitarist Todd Neufeld and bassist Thomas Morgan, he crafts a series of denuded, at times skeletal sonic landscapes that suggest a beguiling blend of twisted, spooked country blues and languid ambient electronica even though there is little technology per se.

The trio wrings an enormous amount of feeling from the slightest variations on a sparse melodic figure or a single note. The resonant changes of colour and depth are brought about by the finely regulated pressure with which a hand comes down on guitar strings or a stick brushes the snare of the kit, as if the instruments were vocal chords trembling with well-judged vibrato. Changes of volume are absolutely crucial here. Then again, another recurrent device is a weeping, slightly Bill Frisell-like minor chord from Neufeld’s guitar which acts as a clarion call amid a serene stream of whispers. The effect is eerily bracing.

Tony Williams and Jack DeJohnette are legends because of their musicality as well as drum skills. They could do more than timekeeping. Sorey appears to tread a similar path. This substantial work makes him a viable prospect to match their giant steps in the fullness of time. 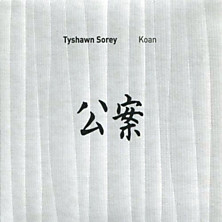