Though he’s best known for his mischievous, multiple redefinitions of hip hop – including his last release (The Unspeakable…) which, he claimed, was the world’s first orchestral rap album – Chilly Gonzales is far from the wag he sometimes likes to portray himself as.

An erudite, articulate Canadian who started teaching himself piano at the age of three, he simultaneously baffled and beguiled fans in equal measure with his first album of piano solos in 2004, and this collection looks set to do the same.

Often compared to Erik Satie, Gonzales’ compositions provide a welcome respite from everyday noise, showing a sophisticated ear for melody despite their initial emergence from improvisation.

This second volume, recorded over 10 days in Paris’ Studio Pigalle, owes a smaller debt to Satie, though there are times – Rideaux Lunaires, for instance – when the influence of the subdued but mellifluous tones of the Frenchman’s famous Gymnopédies can be recognised.

Most of Solo Piano II, however, is a little more upbeat, full of playful flourishes and hints of Gonzales’ jazz background. White Keys is summery and whimsical, though the melody in the higher registers is carefully undermined by a moody retreat to lower keys halfway through.

Minor Fantasy, meanwhile, brings to mind images of elegant, high-ceilinged drawing rooms and tuxedos, and Evolving Doors could almost be Chopin at his most cheerful. Othello is also sweepingly romantic, full of gentle trills and gentle runs; but even this can’t stop Gonzales from puncturing the atmosphere after two minutes with a slap of the instrument’s woodwork.

Most of all, the pleasure of Solo Piano II can be summarised by a sentence included in the liner notes to the first volume: “Although they say the piano can create the most colours of any instrument, it is actually black and white, much like an old silent movie.”

This set is a welcome throwback to simpler, gentler times. It breaks no rules, but these days, coming from a star of so-called "alternative" music, this is arguably as revolutionary as it gets. 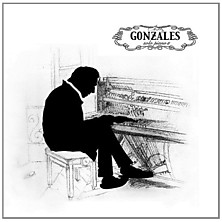