The Twilight Sad No One Can Ever Know Review

These songs are more than ostentatious angst; they’re doors onto shadowy, eerie scenes.

If you only afford The Twilight Sad’s third full-length a quick glance – and I won’t deny that immersing yourself in the Scottish trio’s bleak world requires effort – you might perceive a kind of dark, twisted Editors. Popularised by Interpol, this strain of brooding indie-rock isn’t much in vogue these days; those seeking quick success have moved on, busy mining other quarries. In a way that suits No One Can Ever Know down to the ground, as it implies a band left behind, isolated.

Whereas Editors seem to ape the tortured soul of Joy Division, here it’s the real deal. The song titles imply as much: Dead City, Don’t Move, Not Sleeping, Kill It in the Morning. These are more than ostentatious angst; they’re doors onto shadowy, eerie scenes. Many of the songs start with ghostly rumours, like the stirring of troubling memories.

On Sick, James Graham’s vocals are godly, omnipresent, every rolled Glaswegian ‘r’ and low-crooned note captured in reverberant surround-sound. But at other times he roars furiously, or instead mutters distantly, the words difficult to make out. This changeability adds to the impression that you’re exploring his labyrinthine consciousness, his voice guiding you through a cold ruined cityscape of distorted guitars, trembling bass, melodramatic synth-strings, and a snare battered remorselessly throughout.

Graham frequently references the suffering of a girl or woman he once knew: "I was hoping on a good day you would be fine," he sings regretfully of her on Alphabet; "You look so frail, you know," he tells her pleadingly on Sick. We’re never quite let in on what the story is, but the fragments are haunting: "Should have at least started to stall / Should have said no to it all… Did you see that the fair came round?" (Dead City). He tends to revisit the same lines over and over, not quite as choruses, more like he can’t help coming back to them. There’s perhaps catharsis in this, as though the process expunges the pain of the memories.

A similar theme – trying to forget something awful – ran through the band’s last album, Forget the Night Ahead. Graham hasn’t the slightest intention of ever revealing what these songs are about, and while No One Can Ever Know compels you to enter, to share, to speculate, the disturbing glimpses suggest that it’s better not to know. 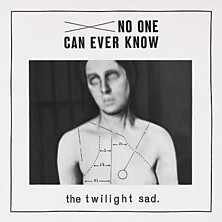