This is worth seeking out.

Alien Left Hand is a graceful and often surprising piano-based work that will further enhance the reputation of Janette Mason. Mason is one of UK jazz's well-kept secrets: a pianist, arranger and composer, she has worked as a musical director for artists as diverse as Oasis and Robert Wyatt.

Alien Left Hand – named after a neurological disorder where one hand has a mind of its own – is her second album, the follow-up to 2005's Din And Tonic. Working with Dudley Philips on bass, Josh Gunta on drums, Julian Siegel on sax, Tom Arthurs on trumpet and Lea DeLaria on vocals, it is a confident and assured work.

Mason's arrangement skills are exemplary. Nothing here is over-egged, and all solos economically underline the players' talents. Highlights include the church-like horn swells of the title track and the piano and double-bass led version of the Eurythmics' Sweet Dreams (Are Made Of This), which builds on the tune's pentatonic melody.

NY Cab Ride, inspired by a taxi journey through the titular city on Christmas day, showcases the band's zest, completed by DeLaria's vocal extemporisation. There is also sadness present, such on the minimal piano-led tribute Mae's Song (for Mason's mother, who died in 2003) and the cover of Leonard Bernstein's Some Other Time.

What strikes you most is Alien Left Hand's pacing, for, even in its quietest moments, it seldom drags. For something new, punchy and accessible with an appropriate measure of funk, blues and jazz, this is worth seeking out. 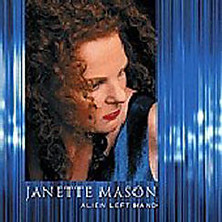