Queen A Night At The Opera Review

Although Queen’s, previous album, Sheer Heart Attack, had yielded two hits, reached number one in the UK and even gone gold in the US it’s a testament that EMI were prepared to let them then create what was, at the time, the most expensive album ever made. A Night At The Opera, borrowing its title from the Marx Brothers’ film could so easily have been an enormous folly.

The aforementioned Sheer Heart Attack had seen their patent methodology of multi-layered recording producing a lush and yes, operatic, ambience produce something that had never been heard before. Combining these swathes of Freddie Mercury and the band’s vocals (both Brian May and Roger Taylor were also perfectly adequate singers) with a thousand guitar lines and Taylor’s Zeppelinesque drums had crossed the pop/rock divide with ease. But this was a band with ambition in spades. …Heart Attack had hinted at a working knowledge of 19th century parlour balladry, 20s ragtime and Jimi Hendrix. A Night At The Opera was to add opera, trad jazz, heavy metal and more to the mix.

Opening with a thinly veiled attack on their previous manager, “Death On Two Legs” the album then careens through a gamut of styles. With the writing divided fairly equally between Mercury and May (with John Deacon and Roger Taylor getting one number apiece as well) it veers between high camp and west coast rock with aplomb. May’s “The Prophet’s Song” serves up a slice of high concept sci fi, while his “39” is amiable country hoke. Mercury, of course, is far more in-yer-face with the frippery of “Seaside Rendezvous” and “Lazing On A Sunday Afternoon”.

Deacon, always the underrated member, may have had only one number, but it was a doozy. “You’re My Best Friend” was the second hit from the album and remains a pop classic; frothy but enduring. Naturally, no coversation about the album is complete without mentioning Mercury’s crowning moment. The multi-part epic, “Bohemian Rhapsody” took months to construct. Beginning as piano ballad, morphing into cod-Mozart and then stomping monster rocker and back to ballad, goodness knows how the band must have felt when he first unveiled it at the keyboard. Hats must also ome off for the executive at EMI who had the faith to release it as a single, following Kenny Everett’s championing of it on Capital Radio. As history records, it went to number one…for ever. Christmas 1975 was to be forever remembered as Queen’s. And A Night At The Opera remains their finest hour. 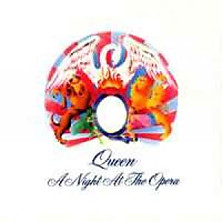