You hear the machinery of Adams’s writing: bright, alert, lucid.

It’s here, at last. As long as five years ago the internet was sprouting rumours that Marin Alsop would be recording Nixon in China. Now those of us who consider it among the most important operas of the 20th century finally have two recordings to argue between.

Nixon in China didn’t just see John Adams perfecting his distinctive ‘Mahler-meets-minimalism’ idiom; it also yanked the art form into the mainstream by depicting familiar, living characters on the opera stage for the first time. Many were shocked that it wasn’t a satirical hatchet job: Adams and librettist Alice Goodman interweaved historical events with surrealist episodes and deeply personal fictionalised musings from the 1972 visit’s main players. All, with the possible exception of Henry Kissinger, come out of it rather endearingly.

Edo de Waart’s recording of that original 1987 Houston Grand Opera production, made a year later with pretty much the same forces, has been the only available until now. Several new productions have been seen since, including that captured here, staged by Opera Colorado in June 2008.

Marin Alsop might not topple de Waart off his default top-spot, but she does provide a strikingly different performance that forms a worthy counterpoint to his. First of all, the story is more vivid: generally superior diction means words are audible, as are on-stage happenings and audience reactions.

Baritone Robert Orth makes a compelling Nixon. His voice has something of the West Wing about it – a natural American twang and gloss, with added expressive elasticity. Countering that is the equally authentic baritone of China-born Chen-Ye Yuan as Chou En-lai, cleanly and earnestly sung. Soprano Maria Kanyova makes the utmost of the beautiful, innocent but strong-willed music Adams writes for the First Lady.

The capturing of the chorus is often too distant, particularly in the ‘Cheers’ passage that ends the banquet scene. That’s a disappointment. But Alsop makes up for it with orchestral detail. Rather than the warm sheen of de Waart’s orchestra, here you hear the machinery of Adams’s writing: bright, alert, lucid, occasionally thin, but brilliantly textured. 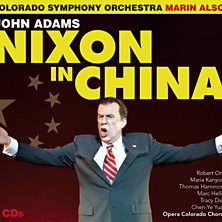