The ultimate version of one of the greatest British rock records of the 80s.

Despite the heady heights of success scaled by The Cult during the arena rock years from 1987 until their break-up in 1995, their second album Love is by far their best. Originally released in 1985, there simply isn’t a bad song on here, and evergreen rock anthems such as Rain and the iconic She Sells Sanctuary are probably their best known and best loved tracks.

Love could arguably be called a transitional album. The band’s first effort, 1984’s Dreamtime, was rooted in the emerging post-punk and goth-rock underground scene. Love represented a quantum leap forward, but their sound had yet to be distilled into the pure hard rock of 1987’s Electric. Ian Astbury’s soaring vocals remained much the same, but Love introduced some Led Zeppelin-sized ambition and sonic scope.

Big Neon Glitter and Hollow Man are typical of the album’s outright gothic moments, and the band’s core audience accepted The Cult’s new-found rockist tendencies with good grace – there was still plenty of reassuringly brooding atmosphere to keep them happy. Although the title track and the psychedelia-drenched Phoenix were a heavy hint at things to come, overall Love straddles the rock/goth divide with peerless skill.

Black Angel and the exquisite Brother Wolf, Sister Moon show the band to be equally adept at ballads. The sheer variety on display also highlights just how mature their writing was. After all, Astbury and Duffy had yet to hit 25 when Love was released. To the public at large, Love may be all about the big hit singles Rain and She Sells Sanctuary, but write off the rest at your peril.

Re-mastered from the original studio analogue tapes, this four-disc box set is a feast for fans. Aside from the original album, there’s a disc of remixes and non-album B sides, a disc of previously unreleased early demos and a disc recorded live in 1985 on the Love tour. Add a 48-page book with unseen contact sheets from the album photo session and a mass of other material assembled by Astbury and Duffy and you have the ultimate version of one of the greatest British rock records of the 80s. 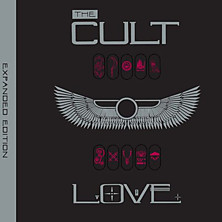